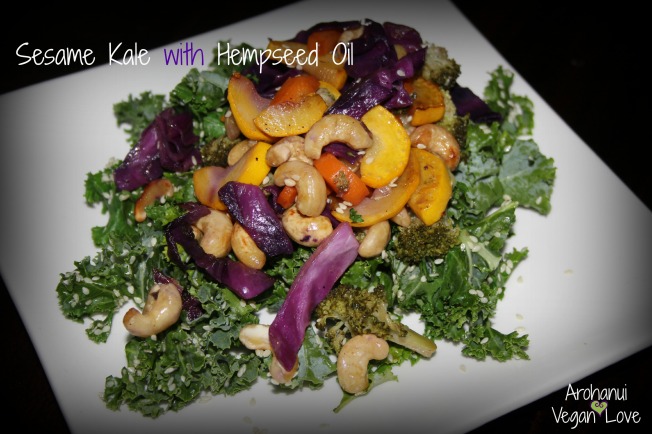 As you know, I am not the best person to ask for recipes. I really do find it easy to just throw everything together. Plus, we use up bits and pieces, and most fruit and veggies are never going to be the same size. The night before I made up some veggies and cashews with rice. Oh, and we actually added in some “chicken-type” nuggets as well. Even a photo can sometimes be a bit of inspiration though.

How do you eat kale?

I seem to think that kale is mostly eaten as kale chips as well as in green smoothies or salads. When we were in California, I would eat kale as a gluten-free option under tempeh or as a side at The Veggie Grill.

Often people seem to either really like or dislike kale. I have to admit, I was a bit uncertain when I had tried it a few years ago. Everyone seemed to love it, and I suppose I was a bit mixed and still making my mind up. This was before I really knew much about kale chips and enjoyed it at The Veggie Grill, but I never seemed to make it at home. Now all that has changed. I suppose you tend to like it more and more as you try it in various ways.

This was a super simple meal. I only had a few veggies and cashews from the night before, and I loved the sesame kale I had made for the chickpea burgers so I decided to combine the two. I tossed the kale with a bit of raw hempseed oil and sesame seeds. Super simple, and another great way to get some greens. Not my typical way to eat kale, but it was yummy. I could definitely eat this again and even change up the veggies or nuts and seeds.

As I continue to post, another HUGE thank you to those of you voting and especially voting every day or sharing. Arohanui Vegan Love is at #7 and not far from getting into the Top 5. I would honestly love to be in the Top 5, and I would really appreciate your votes if you have a second. No signing up or registering required, and you can vote every 24 hours from your last vote. Only a few more days xx

Yes, that is vegan “cheese”. Not something we often have, but we thought we might make some gluten-free vegan pizzas. We are currently sprouting chickpeas for raw hummus, and we were back to experimenting with our juicer yesterday using pineapple, celery, kale, and juicing beets. I wasn’t really sure what Zaedyn would think of it, but of course he loved it!